65 years at the king’s hut (Koenigshuette) are worth celebrating

Horst Lehmann's workplace was in the foundry building, where he worked on a large vibrator. For 40 years, he got up every morning at 4 a.m. and turned on the compressor, air and furnace. But Horst Lehmann also took on tasks after the king’s hut (Koenigshuette) ceased operations: he was responsible for monitoring the dig of the hut and also for the rake there. A bell in his apartment reported malfunctions, then he had to get out and fix the damage - no matter what time of day or night and what the weather was like. In winter, snow shoveling was one of his duties, and he planted the flower boxes that hang in front of the windows on the upper floor of the iron magazine, the latter mainly on a voluntary basis or for the symbolic wage of one euro per day.

Last Friday (8.10.) the anniversary - 65 years at the king’s hut (Koenigshuette) - was celebrated in a small circle. Besides the jubilarian and his wife, Volker Puhrsch, as successor of the company 'Koenigshuette GmbH & Co KG’ and now ‘Königshütte Industriedenkmal UG' as well as Hans-Heinrich Hillegeist and Christian Mühl from the board of the sponsoring group were present. Horst Lehmann received a certificate from Mr. Puhrsch for 65 years of affiliation with Koenigshuette as well as financial recognition, and his wife received a bouquet of flowers from the board of the sponsoring group. The small celebration was documented on film, so that Horst Lehmann and his wife will keep a memory of this day and such memorable day will be remembered. 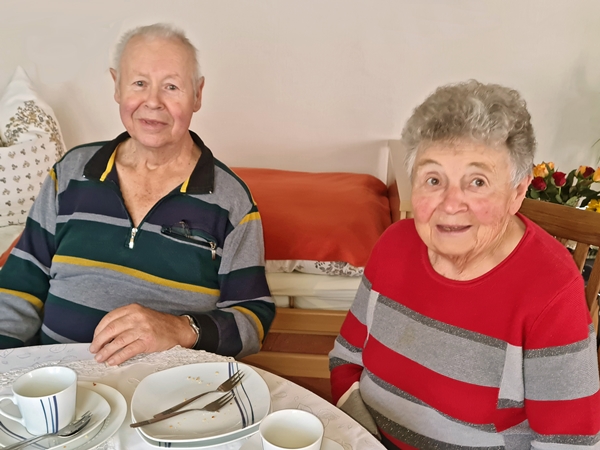