Förderkreis Königshütte hopes for a go-ahead - Start of the project 'Renovation of the machine factory' is difficult. Tours are possible again

Förderkreis Königshütte hopes for a go-ahead

Start of the project 'Renovation of the machine factory' is difficult. Tours are possible again. 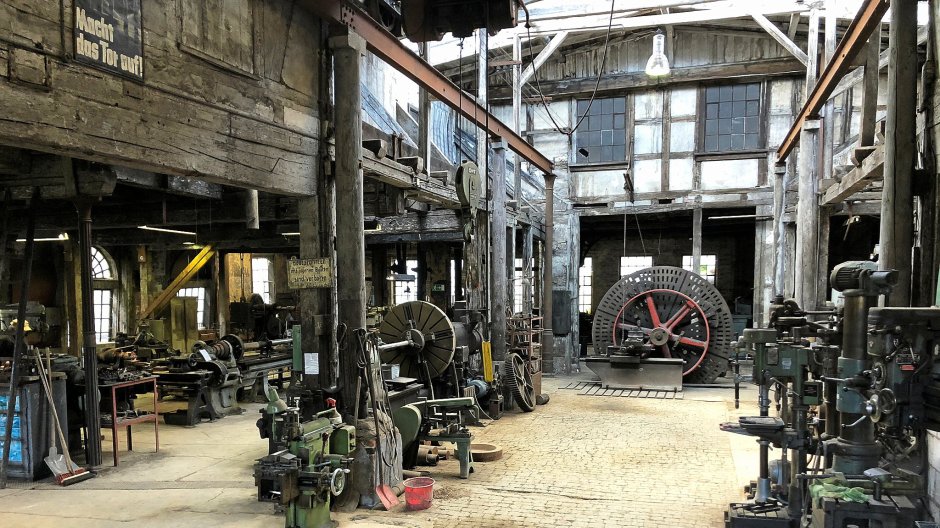 The project is planned since 2016: The historical machine factory of the Königshütte is to be extensively renovated.

Guided tours will again take place on the premises of the ‘Königshütte’, the next one on this Tuesday from 3 pm at the hut fountain. Since a few weeks there are also some innovations for the visitors and also the project "Renovation of the machine factory" is in the starting blocks.

The ‘Königshütte’ in Bad Lauterberg is a testimony to the former iron ore mining and machine building as well as the foundry operation, which was finally closed down in 2001.

The "Förderkreis Königshütte Bad Lauterberg", founded in 1983, is a voluntary association that works to preserve the historical and listed buildings of the ‘Königshütte’ company and to communicate the history of the company to the public. Even if the latter was not possible at the beginning of the Corona pandemic at the beginning of the year, not much has changed, according to board member Christian Mühl. "The association got away without any damage." Apart from the receipt of donations, which were lost due to the cancelled guided tours, there were no further losses. For some weeks now the guided tours have been taking place again under conditions. Last Tuesday, more than 30 people were on site, including visitors from Kassel, to listen to the history of the 'Königshütte'. It was therefore decided to split the group so that the regulations imposed by Corona could be adhered to. Klaus Wolf was one of the two group leaders that day. In the discussion he pointed out that the newest achievement of the association was a new web page, on which much information and pictures about the history of the ‘Königshütte’ (kings' hut) are to be found (in german and in englisch). The Internet appearance financed by promotion funds would give it only for few weeks. Appropriately, QR codes were attached to all buildings of the ensemble under the respective signs (we reported). On the Facebook page of the Königshütte you can also find information about the dates for the guided tours.

During the guided tour, it was pointed out in the former machine factory that the project "Renovation of the machine factory", which was already initiated in 2016, was still relevant. Christian Mühl commented on this in a telephone conversation "A lot of money has to be raised, which we don't have. We are on a slalom course". He further reported that some time ago a building application was already filed. However, this was rejected directly because it would not have been approved. The reason for this would have been that the building had not been used for 10 years, which meant that both the right to build and the right to exist had been lost. It was said that a new building permit had to be drafted, such as that for a new class 3 (fire resisance) building.

This procedure would be common if a new building application was submitted according to previous criteria. The project would then have been in limbo until a new impetus from Hanover came from the Lower Saxony Ministry of Science and Culture and it was then reconsidered.

"We are currently in the process of obtaining confirmation from the responsible authorities," said Mühl. There would be some easily surmountable hurdles to overcome, then the funds would be made available. As soon as this is achieved, the first stage can be tackled. This includes a detailed inventory of the machine factory, planning of the renovation and first repairs towards stability and sealing.

These first steps would cost around 500,000 euros. Christian Mühl further explained that according to the announcement, the starting signal could still be given this year. The financing will be provided by public subsidies and donations.

Note: you can see more photos from the article when you look at the article in the press archive (Pressearchiv) (only in German).