News after the general meeting on Octobre23, 2021 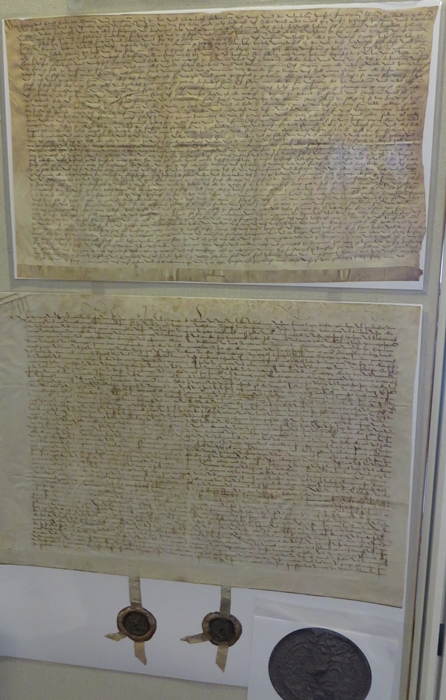 Certificate for the first right of mining, which was awarded to the city of Lutterbeck (the ancient name of Bad Lauterberg) in 1521

Last Saturday, October 23, our general meeting took place at ‘Hotel Riemann’ in Bad Lauterberg. Last year, the general meeting had to be cancelled due to corona. In the morning, Mr. Hans-Heinrich Hillegeist guided interested people through the exhibition on mining history - 500 years of mining freedom in the Lutterberg area (today Bad Lauterberg) - in the local history museum of Bad Lauterberg. The exhibition had been opened in the course of the festive week celebrating the 200th birthday of Sebastian Kneipp and 500 years of mining history at the beginning of September; the exhibition can still be visited until the end of November. Seven interested people listened to the explanations of Mr. Hillegeist. Among other things, they could see a model of the Lutterberg castle which was on the local mountain named Hausberg, a model of a tunnel with a water sewer, many photos of mining relics around Bad Lauterberg and old cracks, as well as drawings by Mr. Kießling, who is able to put himself in the time of the 15th and 16th century in a drawing and to translate it as if he had experienced the events himself.

At 3 p.m., the general meeting began at the Hotel Riemann. About 30 members had taken the time for the meeting, not only members from the closer environment had come, even from Hanover and Berlin members had arrived.

After the welcome by our first chairman, Mr. Hans-Heinrich Hillegeist, and first formalities, several members were honored, the occasions were different:  Mrs. Renate Dittmar was honored for her assistance at the festival week in September, she had invited e.g. the Freiberg mountain singers to the festival week and also organized the concert of the "Blues`n Boogie-Kitchen" for the evening of September 12th (Day of the Open Monument), to name only two. Since it was already certain that Dr. Wilfried Ließmann (secretary) and Mr. Fritz Dittmar (treasurer) would be relinquishing their posts, both were thanked with certificates as well as a bottle of wine each for their many years of voluntary work. Dr. Wilfried Ließmann - he is a member of the sponsorship group since 1993 - had held the post of secretary for 10 years, Mr. Dittmar – he is member of the sponsorship group since 2007 - had taken over the post of treasurer in 2014. In addition, members were awarded a certificate for many years of membership in the sponsorship group (35, 30, 25 years). A bouquet of flowers each was given to Mrs. Kamphenkel and I myself (Gudrun Grzyb). – Mrs. Kamphenkel is in charge of the library and has her hands full at the moment documenting the literature from several estates. My tasks are the weekly reports to the regional daily newspaper ‘Harzkurier’ about the guided tours, the e-mail contact with the members as well as the one or other help for our chairman. In addition, I have been in charge of our website for a good year.

After the discharge of the treasurer and the board, new elections were held. They concerned both the board and the advisory board: Mr. Hillegeist (chairman) and Mr. Mühl (deputy) were available for re-election again and were re-elected, Fritz Dittmar, as already mentioned, gave up his position as treasurer and moved to the advisory board, new member Mrs. Ilse Bodowski-van Doorn was available as candidate for the treasurer's position - she introduced herself briefly - and was elected as treasurer. Dr. Wilfried Ließmann had given up his position as secretary, this task has gone to me (Gudrun Grzyb). Mrs. Samantha Wolf had made her advisory board post available, new member Joachim Gruppe was newly elected to the advisory board, Mr. Eberhard Ließmann, Mr. Volker Puhrsch, Mr. Joachim Wildner and Mr. Klaus Wolf were newly confirmed as advisory board members.  The rest of the meeting followed the agenda. At the end of the general meeting, Mr. Wilhelm Kuhlgatz thanked all board members for their work. Mr. Wilhelm Kuhlgatz is a descendant of Rudolf Holle, who acquired the king’s hut (Koenigshuette) in 1871. He is one of the members who was honored for 35 years of membership in the sponsorship group.

General meeting at the Hotel Riemann - Mr. Wilhelm Kuhlgatz (left) has also taken a seat at the board table 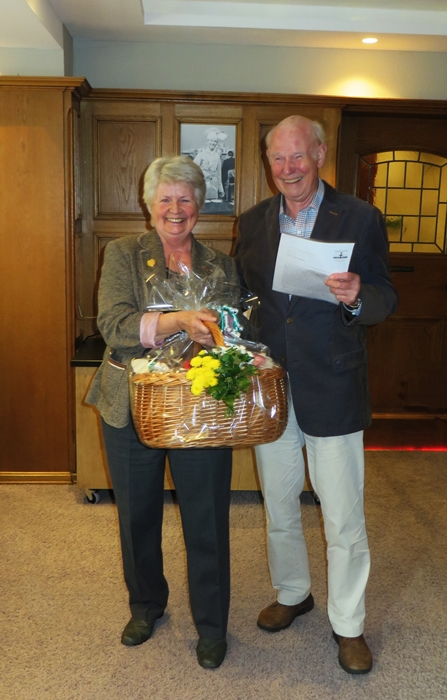 Mrs. Renate Dittmar will be honored for her work and collaboration during the festival week from September 3rd to 12th. (to the right of her: Hans-Heinrich Hillegeist, chairman)