Gleanings from the festival week in Bad Lauterberg, especially the actions at the Königshütte (kings’ hut)

The festive week for the ‘200th birthday of Sebastian Kneipp and 500 years of Bergfreiheit’ (500 years right of mining) is over, the responsible persons and many helpers can breathe a little easier again. On September 3, the festival week was opened by our first chairman, Mr. Hillegeist, with a special exhibition in the local history museum. On Saturday, September 4, there was an official opening in the spa park. Mr. Hillegeist gave a lecture on '500 years of right of mining' and 'the former mountain town of Lutterberg'.

Several events also took place at the Koenigshuette (kings’ hut location), such as the jazz service on September 5 (2021), with Pastor Schmidt and the Waiting Room JazzBand under the direction of Mr. Joerg Baitz from Herzberg. "... an atmospheric service in front of a historic backdrop" was the opinion of many visitors.  Afterwards there was a morning pint with roasted sausages and drinks, to which the 'Waiting Room JazzBand' continued to play. The band is a band of amateur musicians from different age groups and professions, some of them retired.

During the week of festivities, there were daily tours of ‘Deutsche Baryt’, which is now part of ‘Sachtleben Minerals GmbH & Co. KG’. On Monday, September 6, our board and advisory council members were guests at the ‘Deutsche Baryt’. The tour started with an introductory lecture, because in the running operation it was sometimes so loud that one could hardly understand one's own word. Thanks to the lecture, it was easy to identify the individual areas and their machines. With a 'pit light', provided with a new label for the festive week, we said goodbye from the board.

On Tuesday, September 7, in the early afternoon at the Koenigshuette (kings’ hut), a stamping station of the ‘Harzer Wandernadel’ (harzer hiking needle) was ceremoniously opened. However, it will be dismantled again after the festival week. Afterwards there was a guided tour for the opening guests (from the city and the press). In the evening there was a reading with Harz crime stories, it took place in the casting hall. Five writers read from their crime novels. The event, for which one had to register - Corona conditionally, as with all events of the festival week - was booked out in the twinkling of an eye. In the evening, even a few more chairs were added. In the time between the opening of the Harzer Wandernadel (harzer hiking needle) and the crime reading the guests were supplied by the ladies of the Lauterberger Nähtreff (sewing meeting of Bad Lauterberg) with sparkling wine and orange juice as well as pretzels.

The next event, however, had nothing to do with the festival week: on Thursday, September 9, a geological plaque was unveiled on the grounds of the kings’ hut.

The festival week ended on September 12, the Open Monument Day. From 11 a.m. to 5 p.m., there were guided tours every 90 minutes - about 80 guests attended the tours, and Mr. Hillegeist and Dr. Ließmann, who took over the tours, worked tirelessly. Between 11 am and 5 pm, the ‘Café Huettenschenke’ (coffee shop hut tavern) also opened. Here there were sold coffee/tea, cold drinks including beer and ... homemade cakes and pies. They had been donated by citizens of Lauterberg, by members of the Facebook group 'Lauterberger helfen sich' (The people of Bad Lauterberg help each other) - administrator Manuela Lunk - and two pastry shops from Bad Lauterberg. To all of them, we, from the sponsorship group kings’ hut, say "Thank you, dear bakers". Almost all of the cakes and pies have been sold. Around 12 o'clock there was something hearty with a 'Tscherperessen', a meal, based on the food of the miners. Here, too, all the food was served, including the food that had been ordered in advance. The meal was accompanied by music from the Harz Club. Unfortunately, there was a long shower exactly at lunchtime, so that part of the food guests had to move to the hut tavern, because there was not enough space under the tents, but that did not dampen the mood. There were also dinner guests who took their miners meal under the umbrella, such as Mayor Dr. Thomas Gans. From 2 p.m. there was - as on every Open Monument Day - show casting. Here, too, the rush was great.

There were also offers for the youngest visitors: they could pick up a multi-page questionnaire in the hut tavern, an information rally had been designed for children. For answering the questions the children were allowed to select a mineral piece, among other things galena and pyrite were in the offer. These made the children's hearts beat faster. 16 children - up to 10 years - participated in the rally.

At 1 p.m. the ‘Bad Lauterberger Naehtreff’ (sewing meeting) opened. It is located in the ‘factoring house’ since last year. Here, too, the children were catered for painting embroidered pieces with fabric paint. This action was also a great success.

Around 4 p.m., the grill was fired up and steaks and roasted sausages were served, because the day's activities had made people hungry.

The evening ended at 6 p.m. with a concert by the band from Goettingen named 'Blues 'n Boogie-Küche' (Blues 'n Boogie kitchen) with its leader Gregor Kilian. The musicians, who vary from concert to concert, had already rehearsed in advance and got along with each other, much to the delight of the visitors. In the evening, the mood was great, the visitors danced to the band's snappy tunes, which had the motto 'A touch of Las Vegas in Bad Lauterberg'. At 8:30 p.m. the musicians said goodbye with a last piece of music. 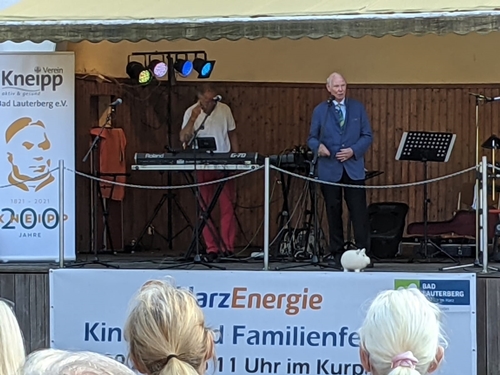 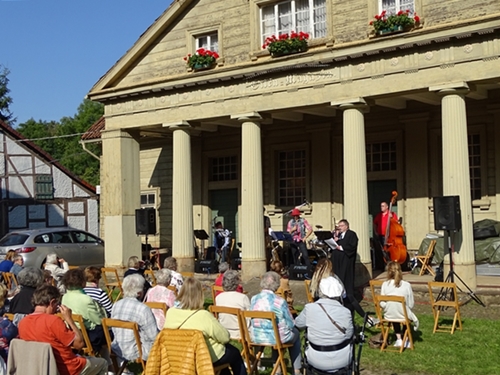 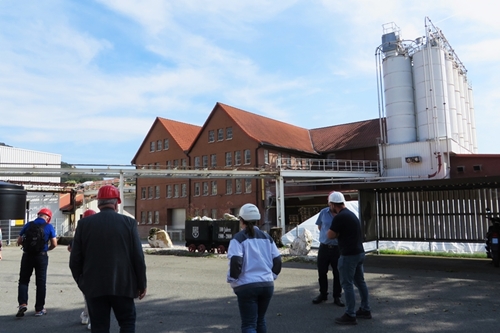 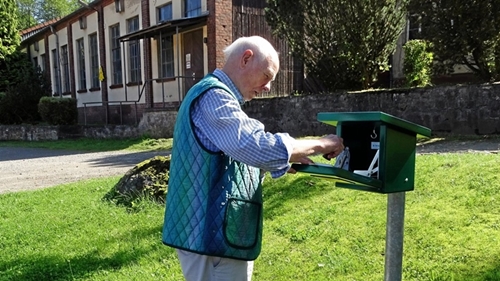 2021_09_07 the first chairman of our support group - Mr. Hans-Heinrich Hillegeist - opens the stamp office for the Harz hiking pin 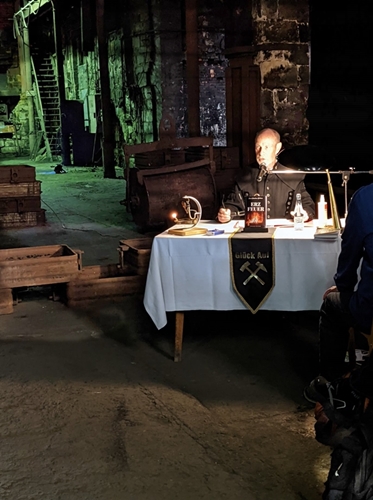 2021_09_07 Hans-Joachim Wildner, an advisory board member and author during the Harz crime reading in the casting hall 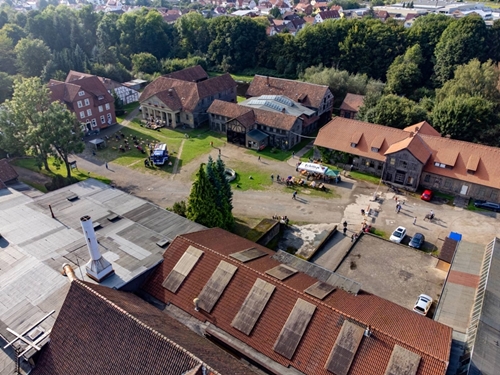 2021_09_12 Guided tour on the day of the open monument with Dr. W. Ließmann, secretary of the sponsorship group