Fundraiser for the benefit of the Koenigshuette in Bad Lauterberg 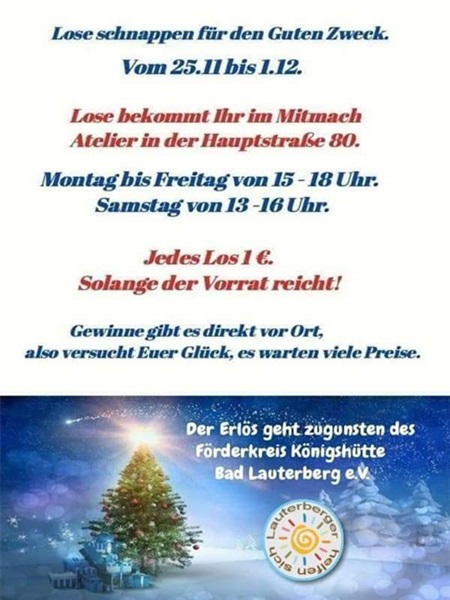 The poster shows the announcement of the raffle sale, it took place from 25.11. to 25. 12. in Bad Lauterberg - it says that
tickets will be sold in the Mitmach-Atelier in Hauptstraße 80 (in Bad Lauterberg), namely
Mondays to Fridays from 3 to 6 p.m., and that prizes will be handed out immediately.
In the picture below it is pointed out that the lot action takes place in favor of the Königshütte.
The circle reads 'Lauterberger helfen sich', the motto and name of the Facebook group.

Our members have already known about it because of the annual Christmas letter: The Facebook group 'Lauterberger helfen sich' (‘Citizens of Bad Lauterberg help each other’). This Facebook group has dedicated this year's Christmas campaign to our support group. With a success that left me speechless. Who is this group? Behind it are Matthias Koch, Stephan Oppermann and Manuela Lunk, from Bad Lauterberg. They are the administrators of the group and Facebook page. The group has been active for seven years. - People from Bad Lauterberg know about the group. - It provides information on questions in everyday life (for example, who knows a good pediatrician), in all areas where help is needed. For example, their members donated home-baked goods for our bake sale at the Hüttenschenke on 'Open Monument Day' last year. And ... every year at Christmas it does a campaign for a good cause. In the group itself there were well over 100 action packages offered to her this year. These packages are created by asking people to donate items that they no longer need themselves, but that could still please others. All the proceeds from them are donated. The sale of these donations supports associations, for example, and honors their work. This year one of the beneficiaries was the Königshütte.

For the annual Christmas campaign, the group was offered so many items that they were able to do an additional raffle.  Each lot - by the way: the lots were all handmade - costed one euro. The raffle tickets even made it to Hamburg. This lot action was then organized for the benefit of the Königshütte. The tickets could be purchased in Sabine Eckstein's studio in Bad Lauterberg. Of course, the whole thing was done there in a fair way for Corona. Many thanks to Mrs. Sabine Eckstein: she was in the studio every day for a week, selling lots and handing out the prizes. Those who could not pick up the parts offered in addition to the lots, because they were not mobile or sick, got them brought - this of course also according to the Corona guidelines. 80 hours of work and a lot of heart and soul was put into the action by the group. I myself followed the action on the Facebook page of 'Lauterberger helfen sich',      I can only say: All respect for what has been achieved there.

Only one thing remains: We, the members of the 'Förderkreis Königshütte' say a hearty THANK YOU to the administrators Matthias Koch, Stephan Oppermann and Manuela Lunk and all the helpers of the Facebook group 'Lauterberger helfen sich'. 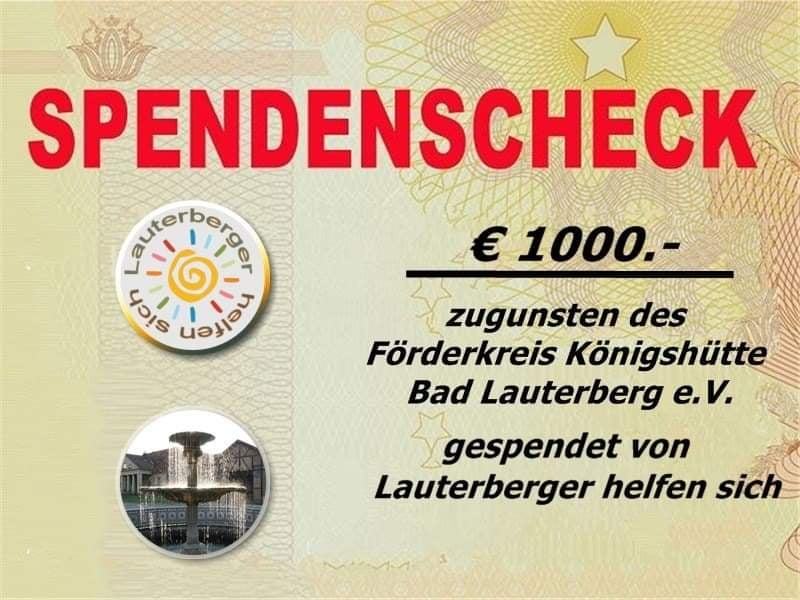